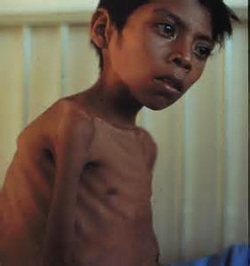 Description: Tuberculosis (TB) is caused by the bacterium Mycobacterium tuberculosis which usually attacks the lungs, but can also affect other parts of the body, including the bones, joints, and brain. Not everyone who is infected with tuberculosis bacteria develops the disease. People who are infected may not feel ill and may have no symptoms. The infection can last for a lifetime, but the infected person may never develop the disease itself. People who are infected but who do not develop the disease do not spread the infection to others. TB is spread from one person to another through the air often when a person with the disease coughs or sneezes. TB spreads rapidly, especially in areas where people are living in crowded conditions, have poor access to health care, and are malnourished. A variety of TB called bovine tuberculosis is transmitted by consuming raw milk from infected cattle. People of all ages can contract tuberculosis. But the risk of developing TB is highest in children younger than three years old and in older people. People with TB infection who have weakened immune systems (for example, people with HIV/AIDS) are more likely to develop the disease.


According to Vanderbilt University, the incubation period for tuberculosis is usually two to 12 weeks. The World Heath Organization points out, however, that the disease can be dormant within an infected person for many years.

Prevention:
Immunization of infants with Bacille Calmette-Guérin vaccine (BCG) can protect against TB meningitis and other severe forms of TB in children less than five years old. BCG vaccine is not recommended after 12 months of age because the protection provided is variable and less certain