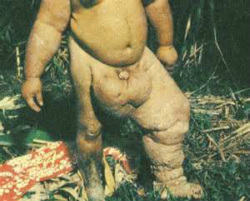 Filiariasis is the name for a group of tropical diseases caused by various thread-like parasitic round worms (nematodes) and their larvae. The larvae transmit the disease to humans through a mosquito bite. Filariasis is characterized by fever, chills, headache, and skin lesions in the early stages and, if untreated, can progress to include gross enlargement of the limbs and genitalia in a condition called elephantiasis.
Approximately 170 million people in the tropical and subtropical areas of southeast Asia, South America, Africa, and the islands of the Pacific are affected by this debilitating parasitic disease. While filariasis is rarely fatal, it is the second leading cause of permanent and long-term disability in the world. The World Health Organization (WHO) has named filariasis one of only six "potentially eradicable" infectious diseases and has embarked upon a 20-year campaign to eradicate the disease.
In all cases, a mosquito first bites an infected individual then bites another uninfected individual, transferring some of the worm larvae to the new host. Once within the body, the larvae migrate to a particular part of the body and mature to adult worms. Filariasis is classified into three distinct types according to the part of the body that becomes infected: lymphatic filariasis affects the circulatory system that moves tissue fluid and immune cells (lymphatic system); subcutaneous filariasis infects the areas beneath the skin and whites of the eye; and serous cavity filariasis infects body cavities but does not cause disease. Several different types of worms can be responsible for each type of filariasis, but the most common species include the following: Wucheria bancrofti, Brugia malayi (lymphatic filariasis), Onchocerca volvulus, Loa loa, Mansonella streptocerca, Dracunculus medinensis (subcutaneous filariasis), Mansonella pustans, and Mansonella ozzardi(serous cavity filariasis).
The two most common types of the disease are Bancroftian and Malayan filariasis, both forms of lymphatic filariasis. The Bancroftian variety is found throughout Africa, southern and southeastern Asia, the Pacific islands, and the tropical and subtropical regions of South America and the Caribbean. Malayan filariasis occurs only in southern and southeastern Asia. Filariasis is occasionally found in the United States, especially among immigrants from the Caribbean and Pacific islands.
A larvae matures into an adult worm within six months to one year and can live between four and six years. Each female worm can produce millions of larvae, and these larvae only appear in the bloodstream at night, when they may be transmitted, via an insect bite, to another host. A single bite is usually not enough to acquire an infection, therefore, short-term travelers are usually safe. A series of multiple bites over a period of time is required to establish an infection. As a result, those individuals who are regularly active outdoors at night and those who spend more time in remote jungle areas are at an increased risk of contracting the filariasis infection.

The most spectacular symptom of lymphatic filariasis is elephantiasis—edema with thickening of the skin and underlying tissues—which was the first disease discovered to be transmitted by mosquito bites. Elephantiasis results when the parasites lodge in the lymphatic system.

Elephantiasis affects mainly the lower extremities, while the ears, mucous membranes, and amputation stumps are affected less frequently. However, different species of filarial worms tend to affect different parts of the body: Wuchereria bancrofti can affect the legs, arms, vulva, breasts, and scrotum (causing hydrocele formation), while Brugia timori rarely affects the genitals. Interestingly, those who develop the chronic stages of elephantiasis are usually amicrofilaraemic, and often have adverse immunological reactions to the microfilariae, as well as the adult worms.

The subcutaneous worms present with skin rashes, urticarial papules, and arthritis, as well as hyper- and hypopigmentation macules.Onchocerca volvulus manifests itself in the eyes, causing "river blindness" (onchocerciasis), one of the leading causes of blindness in the world.Serous cavity filariasis presents with symptoms similar to subcutaneous filariasis, in addition to abdominal pain, because these worms are also deep-tissue dwellers.

Lymphatic Filariasis is transmitted to man by the bite of infected Culex, Anopheles, and Aedes mosquitoes. The infective larvae mature to adults, males and females, in lymphatic vessels and nodes where female worms produce microfilariae which then circulate in the bloodstream. A mosquito bite of an infected human host then completes the cycle. In Bancroftian filariasis, the time from infection to appearance of microfilariae is 6-12 months while in Brugian filariasis it may be only 3 ½ months. Microfilariae generally circulate in the bloodstream at night, but can be daytime in some regions. This is referred to as the periodicity. Adult worms live 4-6 years.Loa Loa is transmitted by the bite of an infected tabanid fly, genus Chrysops. Adult forms migrate through subcutaneous tissues resulting in intermittent swellings called Calabar swellings, and also migrate beneath the eye conjunctiva (Eye worm). Microfilariae circulate in the bloodstream during the day. Adult worms live 4-12 years.

Onchocerciasis is transmitted by the bite of an infected black fly, genus Simulium. Adult worms are found in subcutaneous nodules. Microfilariae migrate to subcutaneous tissues, skin, and eyes. It takes approximately 12 months for maturation to the adult form and subsequent microfilariae production. Adults live 10-15 years.

There is an asymptomatic incubation period of at least 6 months and up to 6 years. As this may lead to difficulty in diagnosis, some have suggested routine post-travel serologic screening for those individuals with >1 year exposure in an endemic area.

The best method of preventing filariasis is to prevent being repeatedly bitten by the mosquitoes that carry the disease. Some methods of preventing insect bites include the following:

In addition, filariasis can be controlled in highly infested areas by taking ivermectin preventatively before being bitten. Currently, there is no vaccine available, but scientists are working on a preventative vaccine at this time.